Of Judges, Beggars, and the Law 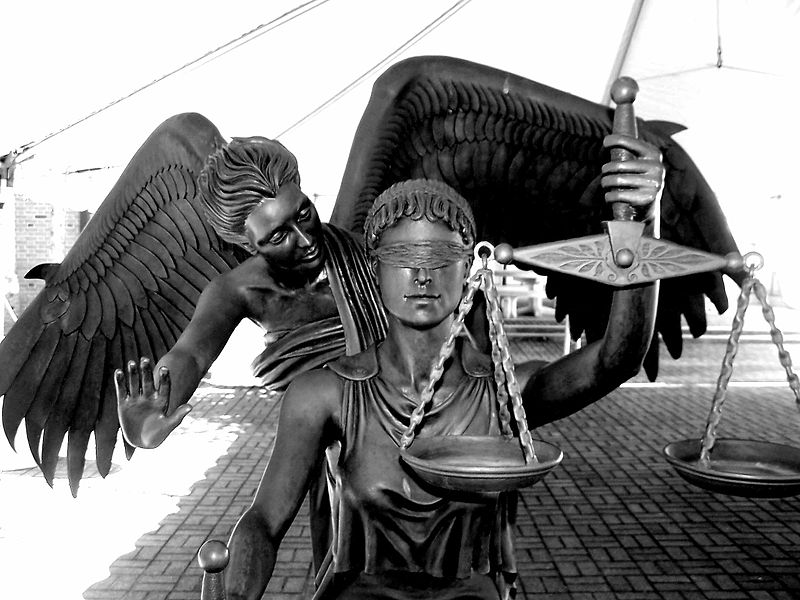 We demand Justice until Justice demands us,

then sue we for Mercy’s saving grace.

We are creatures of justice. Simply defined, justice is an enforced standard of law affixed to a predetermined punishment. We call upon justice to protect us, secure tranquility, and provide recompense when violated. Without it, chaos reigns. Yet we are equally creatures of mercy, invoking the powers of benevolence and clemency to temper the justice. In the matter of violence, we suffer a dichotomy of character when the two vie for victory in the courtroom - justice demanding its recompense, mercy making her appeal. Herein lies the crux of our judicial system, for mercy can no more rob justice than justice deny mercy. How then is crime to be effectively punished?

I am well acquainted with violence. I was born violently, raised violently, became the victim of violence, and was ultimately accused of and imprisoned for violence. Perhaps, because of this, I more closely identify with violence than love, though I am not a violent person myself. Through personal experience I have arrived at the same hypothesis as James Gilligan, which is that all violence is tragedy and “the attempt to achieve and maintain justice, or to undo or prevent injustice, is the one and only universal cause of violence.” Our ability to internalize this concept is paramount in determining punishment, for it removes us from the trauma of the act and allows us to contemplate cause. If violence is, as Gilligan suggests, a learned behavior then so too is our reaction to violence. It is perhaps almost as important to understand our reaction to violence as it is to understand violence itself. We must unlearn what we have inadvertently been taught, which is that the answer to violence is violence.

On a hot summer day in my childhood, I sat splashing in a shallow pool of water, lost in the innocence of a make-believe world. Suddenly, I felt a sharp stinging upon my shoulder and looked to discover the cause - a horsefly feeding upon my shoulder. The trickle of blood running down my arm alarmed me. I had never been bitten this way before and began wailing for help while the insect continued its vampirism. I am not certain how long I carried on this way. I only know my hysterics were sufficient in attracting the attention of my stepfather who promptly smashed the insect into the netherworld before beating me. When he was through with the beating, he dropped me back into the pool of water and angrily informed me that he had now given me something worthy to cry over - in the future I should not cry but smash the bug myself.

The point of this experience is to illustrate that the concept of returning violence for violence had not naturally nor instinctively occurred to me. It was introduced - if something hurts you, hurt it back. Perhaps this seems a minor incident but it demonstrates how we inadvertently teach violence. Some may suggest that swatting a biting insect is an act of protection, not violence, yet could we as easily teach children to brush the insect away rather than destroy it? We feel a sense of justice in killing because it first hurt us or because “it was just a bad bug anyway”. We feel no remorse or slight of conscience. We do not imagine the pain or suffering of the creature. We do not consider the tragedy of the insect’s plight or existence. Nor do we consider the repercussions of teaching a child that violence is an acceptable form of protection, for how does a child learn to make the distinction between being justified or not? As Gilligan states, violent criminals almost always feel a sense of justification at the time they committed their act. This sets the stage for judgment and the need for judges.

Obviously, we cannot allow ourselves the luxury of contemplating the tragedy of every living creature. It is impractical and would drive us to insanity. We live in a world of tragedy and develop coping mechanisms to this end. Yet, tragedy is tragic for a reason. It is an indicator that something is not quite right. There exists before us an injustice and because we are creatures of justice, we seek to right the wrong. Since we are equally creatures of mercy we establish systems to protect not only the victimized but also the victimizer. This is the basis of our judicial system, or was the basis as originally intended. We bring to the courtroom judges, beggars, and the law. The law presents the victim and demands justice. The criminal pleads his cause and begs mercy. The judge determines culpability and sentences the criminal accordingly. The sentence is ultimately a combination of justice and mercy - justice being the penalty demanded and due by law; mercy being the temperance and benevolence appealed for by the beggar based upon personal experience.

There are those who insist mercy has no place in a courtroom. They demand justice and justice alone. Their insistence appears reasonable, for if mercy was allowed to continually rob justice what purpose would there be in the law? Without enforcement, the law would become void. In light of this truth, what right does mercy have in court? Mercy has its right when justice demands more than it is due. In this, I do not speak of false accusations or misrepresentation. What I suggest is when the penalty affixed to the law is inappropriate, it renders justice ineffective so that justice served becomes in actuality, an injustice. Conditioned anger towards violence unchecked by mercy has turned our current penal system into cesspool of reactive violence. It is a paradox best explained through illustration.

If you have ever been permitted, as have I, to pass behind prison walls into the lives of the condemned, the tragedy of violence comes quickly into view. Here you find a mother of five children, sentenced to prison up to 98 years for murdering her own husband. She has been locked in prison now for 16 years. She is 60 years old and eligible for parole in 6 years. If she is granted parole, it is unlikely she will be allowed to stay in the United States where all her children and grandchildren reside since she is not an American citizen. She is Canadian and has a thick French accent to prove it. Her deceased husband’s family is determined to block any attempt she makes for her release, having been successful on several occasions when she asked to be transferred to a prison in her own country. The family’s complaint, respected by U.S. courts, is that Canadian prisons are not as harsh as American prisons. So here she remains, and may possibly remain, until her dying day. If this is simply justice being served, wherein lies the tragedy? The tragedy is manifest when our conditioned response to her offense is set aside and we seek to understand the cause of the violent act.

Allow me to introduce you again. Here is the loving mother of five children who smiles easily with eyes that reflect kindness and intelligence. Here is a woman of faith, not only in a greater power but in humanity. Her sense of humor is healthy and intact as demonstrated by the small pranks she plays upon those around her. She is philosophical yet realistic about life, a person of moral strength and fortitude. What is she doing in prison?

Sixteen years ago she emotionally snapped. She was married to an abusive man and endured the abuse for all the reasons women typically do who are in the same situation. The blow came when she discovered her husband was molesting her daughters. The memory of her own childhood molestation flooded her mind. The violence she had endured at her husband’s hand was bearable but the violence against her daughters was unfathomable. She shot him dead one day while he lie sleeping on his bed. She makes no excuses. She knows it was the wrong reaction. She was not in her right mind. The violence of her past combined with the violence of the present overcame her senses and she acted upon the impulse to put an end to the injustice. She is not a violent person. She is not the hardened criminal you want to believe is locked away for life. Every day you work and associate with people more criminally minded than this woman. If she could reverse the act, she would. The tragedy increases when you discover that her oldest daughter, out of desperation, turned to a life of prostitution and was eventually murdered shortly after the death of her infant child. Her other children visit as they can, once or twice a year. She does not like a lot of contact with the outside world because of the aching it causes her. She writes and exchanges phone calls but physical visits are a reminder of the life she lost the day she reacted to violence violently.

Who in this instance was the true criminal? Does mercy deserve a place in the court? If the penalty affixed to justice is unjust and ineffective - if we perpetuate tragedy by answering violence with violence – then the answer is yes, mercy has a right as well as justice. We must break the cycle of violence we perpetuate under the guise of justice. It is not only ineffective but is eroding the fabric of our society. Punishment, in and of itself, has never yielded positive results. If violence is a learned behavior, we must unlearn it and the only way to accomplish this is by understanding its cause and effect. We must stop handing down sentences in the name of Justice that are not truly just. We must stop feeding the minds of our children and society with the idea that violence is the only answer to violence.