We've been living in our new place, nicknamed "The Hedges", for almost a year and one of my very favorite things about this place is our woodstove. Someone actually asked me what I used to talk about before I had a woodstove.

I like to hack things or find new ways of performing ordinary tasks more efficiently. It's not always "things" I hack. Most of the time it is a particular way of thinking. Sometimes it is a method. For example, when I was in prison the guards would wake us at regular intervals during snow storms to shovel a path around the entire prison. As you can well imagine, no prisoner is particularly excited to wake up at 11pm, 1am, 3am, and 5am to clear a perimeter path for their captors' benefit. On the other hand, the guards weren't particularly overjoyed standing around ensuring no one escaped while we slowly and inefficiently shoveled their foot path.

It's a ridiculous situation, prison. It's also not the kind of place that encourages hacking. How many times did guards bark at me, "IT'S JAIL, NOT YALE, COOPER!" whenever I attempted to improve the situation?

I did manage, however, to hack the shoveling routine. I realized some people were good at shoveling and others were less than good. Besides the obvious obstacle of snow, there were issues of health, defiance, apathy, and innocent inability to overcome. It didn't make sense in my mind for each person to stand alone shoveling one little part of the path. It took too long. I realized if we stood in a single line with the strongest shovelers in the front, then pushed our shovels through the snow like plows instead of traditional shoveling, we could clear the path in a fraction of the time it usually took. It worked perfectly which was a win for all involved. That's the cool thing about hacking - finding a new angle on a traditional problem.

One hack I've been actively pursuing lately is creating quick fire starters from stuff I already have kicking around the house. What I am attempting to achieve is the most efficient, failproof method for starting the perfect fire every time ---> without putting anyone's life in danger (ie. gasoline) and without spending a million dollars. Over the course of this winter, I have managed to come up with an idea which is proving to be viable.

Here's how it works: 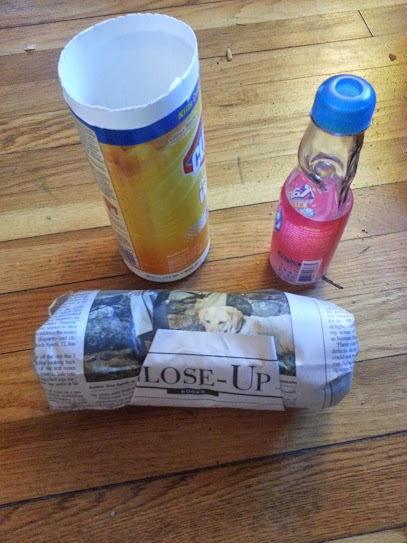 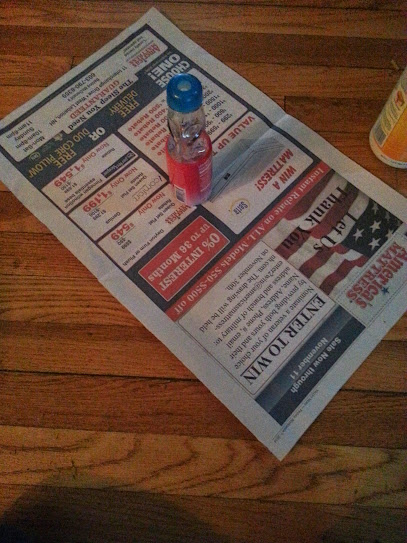 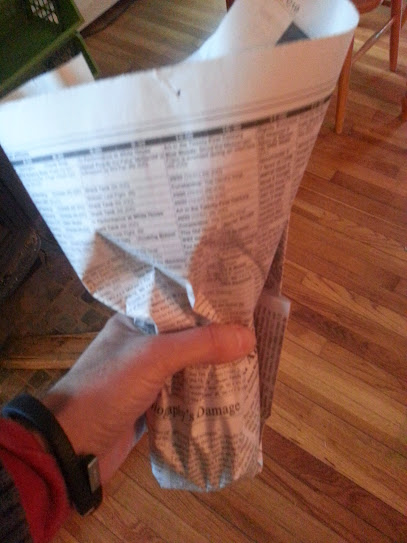 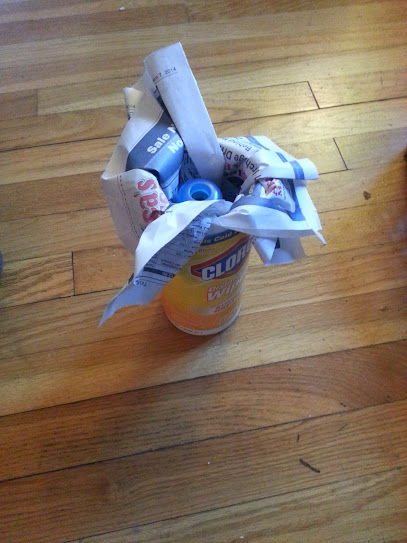 Shove the entire thing into the mold. 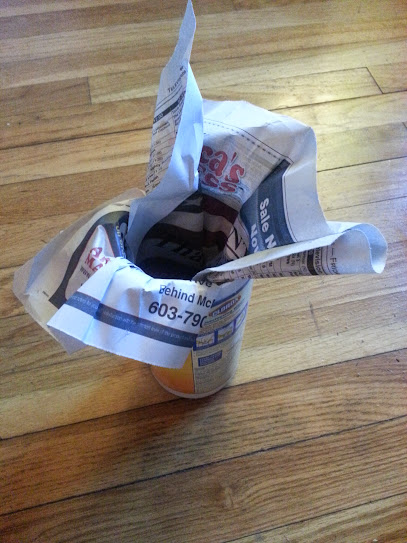 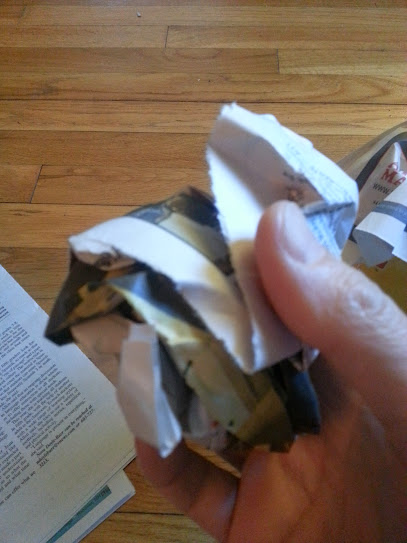 Crumple up small bits of newspaper to fill the mold. This is where you can experiment and get creative. I have played around with using a mixture of paper, pine cones, bark, autumn leaves, etc. The trick is filling it with just the right combination of "stuff" so it burns easily but not too fast. 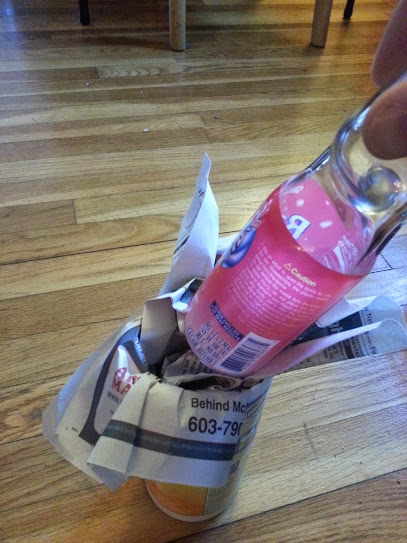 Use your plunger to fill the mold. I've noticed if I pack it too tightly I can't get it to burn well enough to be effective as a fire starter. Over time, I have learned which combination works best for me. Right now the combination I like best is to pack the paper fairly tightly but halfway through I throw in old candle wax chunks we have been saving after our scented candles lose their scent. 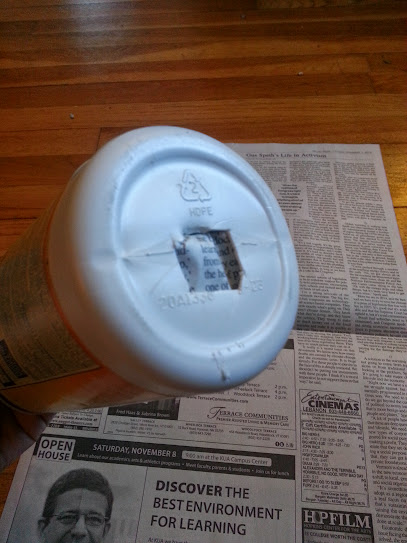 I discovered it was important to cut a hole in the bottom so I could push the whole thing out after it was packed. 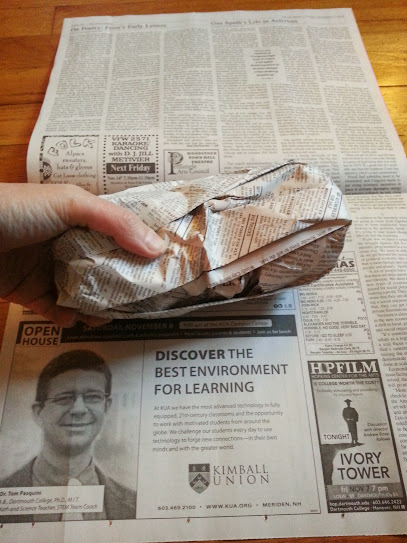 Here it is after I take it out of the mold and fold the top edges over. 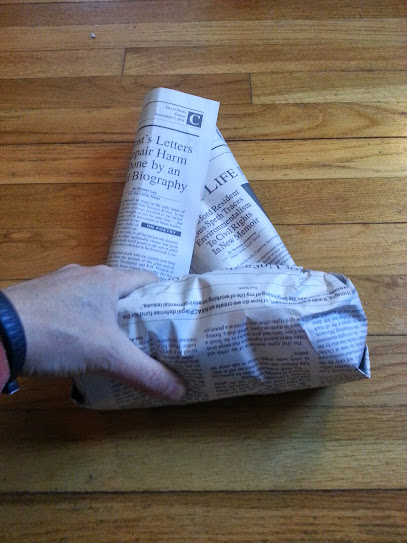 Roll the whole thing up in a half sheet of newspaper to hold it all together. 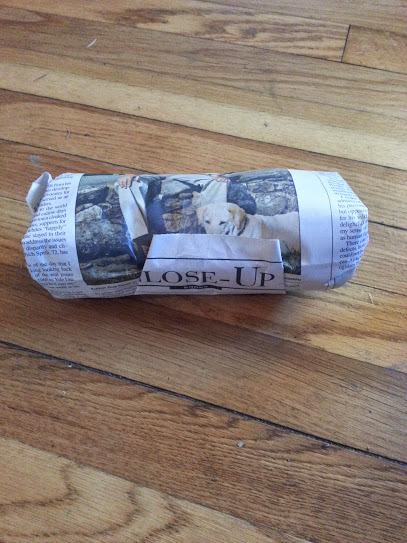 Use a single piece of tape to secure it and voila! 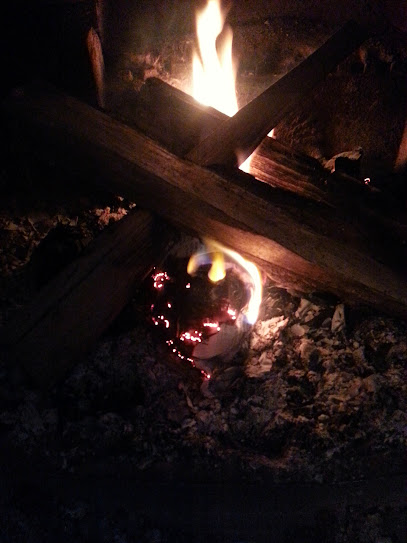 Here it is burning slowly in my stove. Pretty cool, huh?

One of the main issues I have encountered is getting the log to light easily. I have figured out that not packing it too tightly helps. I have also experimented with poking a couple of wooden stick matches into it and lighting those, sort of like a wick, rather than trying to light the log itself. My boss suggested using corrugated cardboard. That might be a good idea but he tends to take hacking to the ultimate extremity of the universe which sort of violates the KISS Principle.

The most time consuming part of this project is getting caught up reading all the little articles I missed the first time around. We have a wonderful newspaper in the Upper Valley. If you subscribe to a crappy paper, something like the Manchester Union Leader, you probably won't be plagued by this problem.